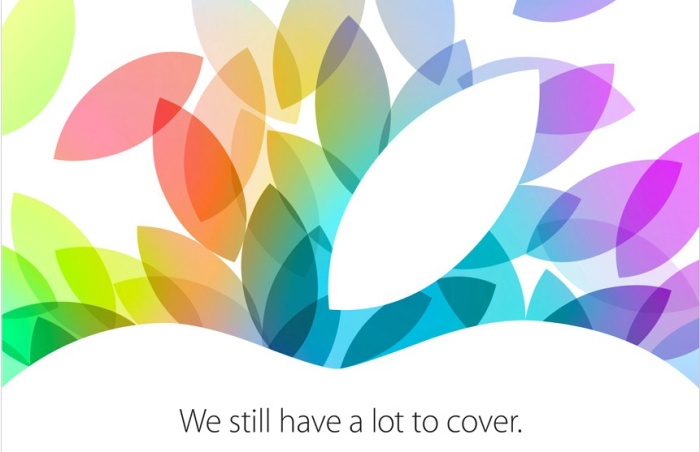 Apple has now sent out the invites as of Tuesday, October 15 for their special event at the Yerba Buena Center for the Arts in San Francisco on Tuesday, October 22 at 1pm EST. They usually hold conferences in this center when there are major announcements coming, because of the larger area compared to their home base in Cupertino, or the New York location.

We’ll start off with iPads. This event is going to be focused around the full size iPad and the Mini. The full size iPad is going to be redesigned, shaping around the incredible design of the iPad Mini. The steep rounded edges and flat back has taken off and will suit the full size very well. They also introduced a couple new screen technologies with the Mini that are being transferred to the iPad. Currently, the full size iPad uses a glass based material for the touch capacitive surface, whereas the Mini uses a film-based touch panel. This technology is what makes it so thin and light. The other advantage the Mini has that Apple included in iOS 6 was a special touch recognition sensor that detects when you’re holding the device on the screen and when you’re trying to scroll. Initially the iPads (up to the 3rd gen) if you put your finger on the screen and tried to scroll it wouldn’t know what to do. Now if you put your thumb on the side and then scroll it detects it and performs the action. This is why the iPad has always needed one inch bezels, whereas the Mini had a bezel-less design. This works on even iPhones and iPod touches.

The Mini will also get a fairly large upgrade, not so much cosmetically but with performance. There has been mixed reports whether it will get a retina screen, and here’s my take. I think they’ll keep the current Mini, and introduce a high end upgraded model. The current Mini fits a lot of people’s lifestyle and needs, and so they may introduce colours on the lower end model like the iPhone 5c/5s. Having a 2 tier sku system will help entry level models get more market share, and the people who need performance and more technology will go for the higher end model. I can’t see the current pricing structure change, they may just discount the lower end model to $279. The higher end model will see the A7X, retina display, 1GB ram, and possibly higher in-line storage tiers, especially on the full size iPad.

Both the iPad and iPad mini are going to get the touch ID sensor as well in the higher end models. The iPad 2 will also finally be discontinued which leads me to believe they may do colours with a lower end non retina as well. They would essentially redesign the iPad 2 with Siri, lightning, and then add colours at the same price point. The higher end models of both iPads are going to have the same finish as the iPhone 5s with the 3 colour options (yes, that does mean Space Grey). Reading into the tagline on the invite – “We still have a lot more to cover” there might be a surface styled keyboard smart cover type accessory unveiled as well. All new iPad models will be released on Friday November 1, 2013.

The other main attraction to this event is going to be OS X Mavericks. The iMac line was silently updated about 3 weeks ago with Haswell and AC wireless, and so I expect the Mac Mini to be updated at this event with the same thing. They might even add some surprises to it since it wasn’t silently updated as well. The Macbook Pro with Retina will also be refreshed with updated internals, and possibly new physical features like smaller and more refined designs. The release for the new Mac Mini will be same day, and early November for the Macbooks. The Macbook Pro line will be discontinued, or kept with no updates and possibly discounted. It’ll be the last leg in completely phasing out the CD-ROM drive.

Other small updates will include an Apple TV refresh. It’s going to keep the same great design, but host a couple of minor improvements. The only major thing they could change about it is adding an App Store interface, as well as 3rd party game controllers and enhanced video play back including multi-format support. The last major unveiling of the event will be the final details regarding the brand new redesigned Mac Pro. It was briefly unveiled during WWDC back in June, and there hasn’t been much said about it since. We should see pricing, and a release date. I’m predicting it’ll start at $2,899, and launch second week of November. To compliment the new Mac Pro, Apple will update the Thunderbolt Display. This will include a redesign to accompany the thin displays in the iMac line, along with 4K resolution. One of the big features of the Mac Pro is the ability to output in 4K, so Apple will need a display to utilize the full potential of this. Mavericks will be released on the Mac App Store for all users on 10.6.8 and up for $19.99 on October 30, 2013.

Apple might hold a “One More Thing” styled unveiling of an iWatch with release in Spring of 2014, but with all the stuff they’re unveiling at this event I don’t see it happening. Same with an actual iTV Apple branded television. Those are still on the horizon. The watch is coming, but with other competitors releasing watches with horrible reception, they may wait a bit longer to make sure it’s perfect.

Keep a watch out next Tuesday, October 22 at 1pm EST on your favourite tech blog for a live stream of all the surprises. This should be Apple’s last event for 2013, so see you all in 2014 with the next Special Event!