Our second day at Comic-Con 2014 was mostly spent at the Xbox Lounge in the Grand Hyatt hotel. We intended to complete the Assassin’s Creed parkour course, but the line was too big when we arrived and had other arrangements to attend to.

Our group was granted early access to the Xbox Lounge, allowing us to take a tour and play some new games an hour early. We began by circling around the massive conference area and finally settling in at the Evolve booth. We had 5 people to fill out the game. I played as the Assault class for the demo. This hulking firepower character used force to complete the job. Armed with a machine gun and flamethrower, he is able to withstand more damage than other team mates. The end of the game resulted in the monster taking us out, but it was a great experience and I look forward to the final release.

The next demo was Sunset Overdrive. I was extremely excited to try out this game as it’s been received to high praise since the public demo from E3. The game mode was Chaos Squad, a multiplayer co-op match where players work together to protect their base. Special giveaways were in effect for the first 5 matches played, awarding the top player of each round a limited edition Sunset Overdrive poster art from Mondo. The round had some great competition, and Sunset veteran Justin Robey took the win. Since he’s part of the internal team, he passed along the victory to the second place player which was me. I had full intention of getting one after seeing it at the panel that took place yesterday and it worked out great that I had won one. 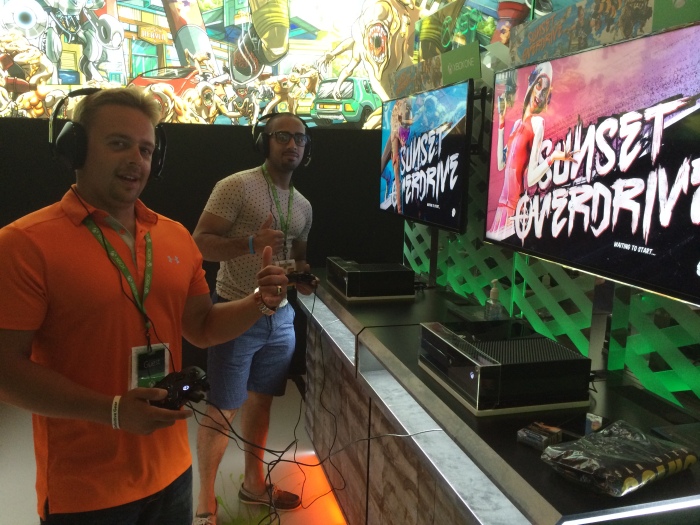 I decided to take a trip back to the hotel afterwards to drop off the poster and extra prizes so they didn’t get ruined. The Titanfall tournaments began at 2pm so I wanted to be back in time for that.

We arrive just as they started and lined up for our first match. This event was the bulk of the day. Two teams of six played, and the highest scoring player was seeded into a leaderboard of 12 people that would play in the finals. My first match did not go well as I was using classes made by others. For my second match I had the time to create my own class and scored high enough to seed into the finals leaderboard.

I played a few matches afterwards to try and beat my score which would place me higher in the finals bracket. The qualifiers ended at 7 and I finished high enough to be placed. The finals were set out as the best 2 out of 3 with 6 man teams. We ended up losing in the end but I still received a $20 Xbox card. It was a great experience that fit nicely with the Kinect Sports Rivals finals tournament.

Tomorrow is the big day. It’s what I’ve been working to for the last 3 months. The Kinect Sports Rivals World Championship tournament will be taking place from 11a-8p Pacific time. I’m seeded in the 4th match, so my first round should be around 2p.

Thank you to everyone who has shown support and helped get me to where I am today and will be tomorrow. Expect to see a recap of the event on Sunday, and follow @kevinsolecki on Twitter for live updates.